Evernote is the latest app to join the scanner app party. And it’s a good one to have. Evernote has supported photos in notes for a long time. It even supports physical scanners that upload digitally scanned copies to your Evernote account, where you can search through them.

Another good thing about Evernote is that Scannable is just a part of the Evernote empire. It’s not a product in itself. So you won’t be pestered with ads or upgrades. And Evernote is quite good at design. The new Evernote Mac and web apps are a testament to their dedication to design.

Right now, one of the other best and most recommended scanning apps is CamScanner. I’ve been using it for years and I love the pro editing features.

Okay, so let’s pit them against one another.

While it’s not necessary and isn’t turned on by default, Scannable is capable of deep Evernote integration. From Settings, you can log in to Evernote, choose a notebook, turn on auto upload and every snap will be uploaded to Evernote (all you have to do is hit the Share button).

If you’re already a big Evernote user, or you have Evernote Premium with the OCR feature, Scannable makes things a lot easier for you.

Going paperless with Evernote: Evernote is great for taking notes and organizing content neatly in notebooks. The pro search features will help you filter results faster. It works great as a life logger. Along with documents you scan using Scannable, you can upload images and PDFs as notes as well. A $5/month premium will give you increased storage space and OCR. 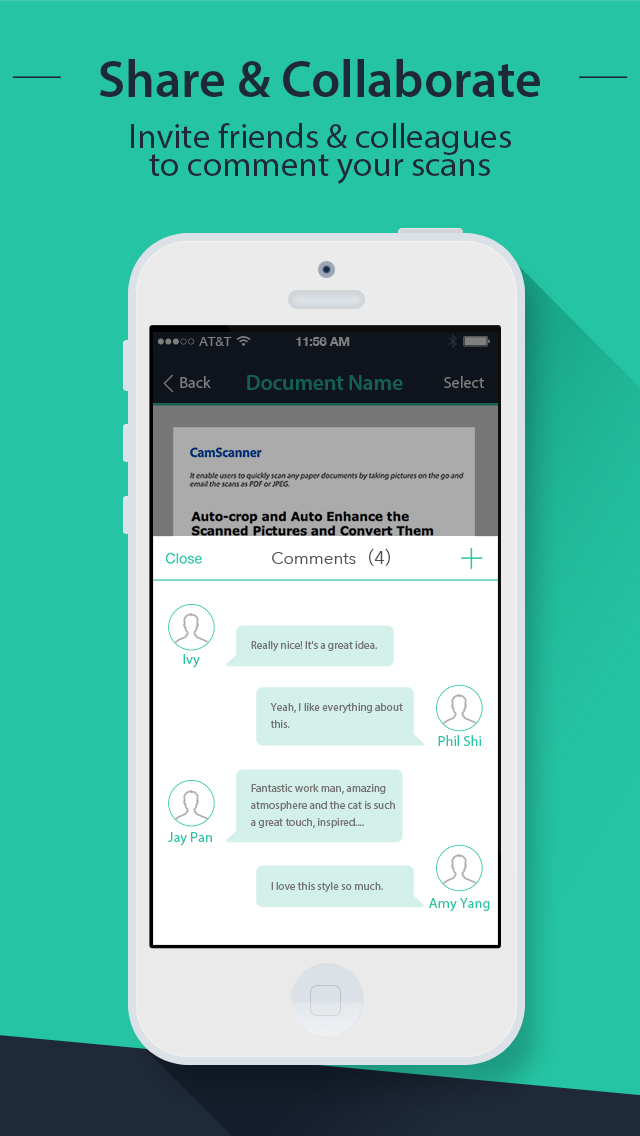 Scannable Is Also Pleasant to Use

Scannable doesn’t have any ads. It’s designed to make the process of scanning fast and easy. It defaults to Auto mode where the app will estimate the edges of the receipts and click the shot itself (there’s a manual mode as well).

You can keep doing that for one document after another. Tap the checkmark when you’re done and you’ll be presented with the share sheet.

This screen could have been better visually, but I like the features and functionality. Using the Export button brings up iOS 8’s default Document Picker where you can upload the document to any cloud account you have linked, like iCloud Drive or Dropbox, right there inside the app. There’s no need to jump.

The More option brings the default share sheet where you can share via email, messages, and more.

One thing Scannable doesn’t have is pro editing features. Yes, you can crop, rotate, or delete. But that’s it.

CamScanner will give you advanced control over brightness and contrast.

As long as the shot has enough light and the document is put against a contrasting background, both do a great job at scanning documents with respectable legibility.

CamScanner is a standalone product so it’ll show you ads. The app also has its own cloud system.

I’m not a fan of CamScanner’s share mechanism. It’s just one page showing all options at once.

The reason I like Scannable is because it turns scanning documents into a dead easy process. Hold your phone up, let it scan the document, hold up another document, then another, then another. Upload them to Evernote, iCloud, or Dropbox and you’re done.

The only reason you might want to choose CamScanner over Scannable is the pro features. But to many, Scannable’s higher simplicity is going to be a pro and not a con.

If you’re planning on going paperless, Evernote is one of the best systems to try. And with Scannable, the barriers to entry have been lowered even more.

If you’re a small business owner or just a human being, you probably have a lot of receipts to process and save. So sign up for Evernote (if you haven’t already), link it with Scannable, designate a notebook, start scanning documents, and give them relevant titles so it’s easy to search for them later.

What’s your current setup for going paperless? Let us know in the comments below.

The above article may contain affiliate links which help support Guiding Tech. However, it does not affect our editorial integrity. The content remains unbiased and authentic.

Looking for a scanner app to store important documents, papers, and receipts? Check out my take on CamScanner and