INSTANT NEW YORK TIMES BESTSELLERA moving, hopeful, and refreshingly candid memoir by the husband of former Democratic presidential candidate Pete Buttigieg about growing up gay in his small Midwestern town, his relationship with Pete, and his hope for America's future.Throughout the past year, teacher Chasten Glezman Buttigieg has emerged on the national stage, having left his classroom in South Bend, Indiana, to travel cross-country in support of his husband, former mayor Pete Buttigieg, and Pete's groundbreaking presidential campaign. Through Chasten's joyful, witty social media posts, the public gained a behind-the-scenes look at his life with Pete on the trail--moments that might have ranged from the mundane to the surprising, but that were always heartfelt. Chasten has overcome a multitude of obstacles to get here. In this moving, uplifting memoir, he recounts his journey to finding acceptance as a gay man. He recalls his upbringing in rural Michigan, where he knew he was different, where indeed he felt different from his father and brothers. He recounts his coming out and how he's healed from revealing his secret to his family, friends, community, and the world. And he tells the story of meeting his boyfriend, whom he would marry and who would eventually become a major Democratic leader. With unflinching honesty, unflappable courage, and great warmth, Chasten Buttigieg relays his experience of growing up in America and embracing his true self, while inspiring others to do the same. 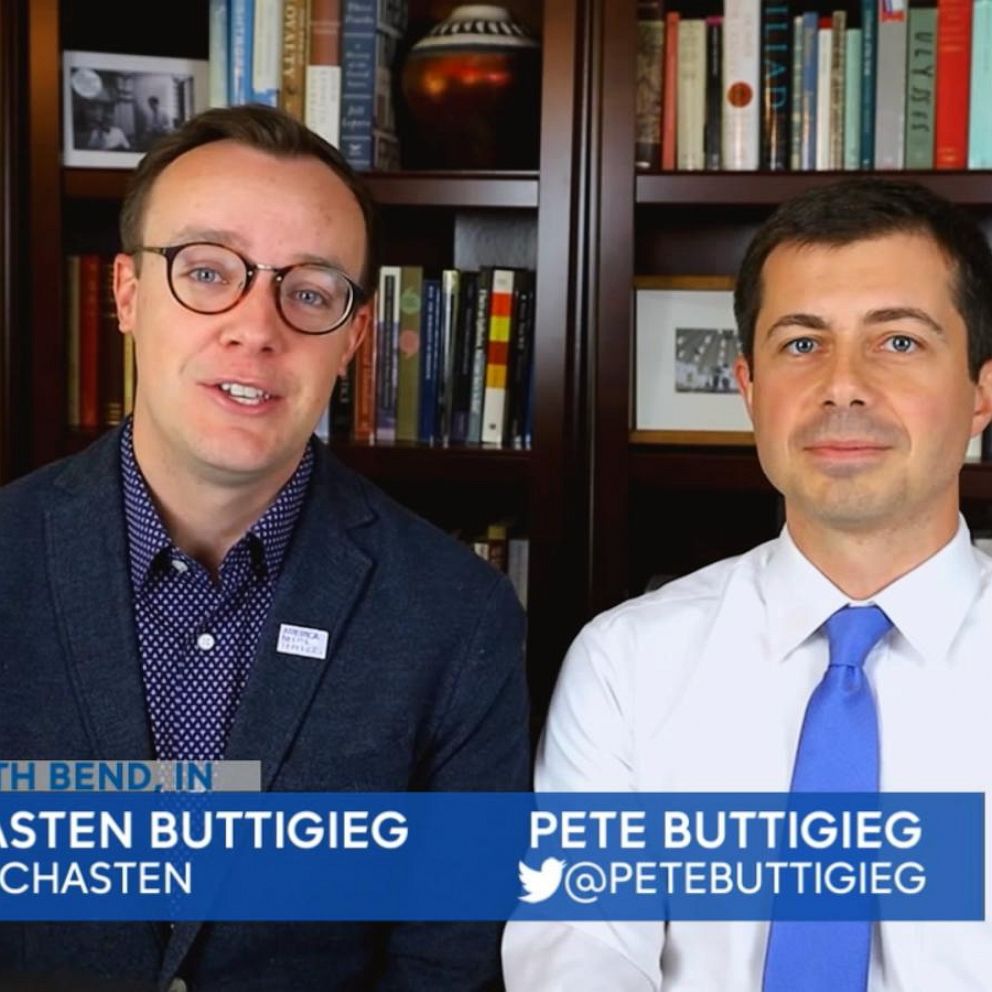 Earn money by sharing your favorite books through our Affiliate program.

Chasten Glezman Buttigieg was born and raised in Traverse City, Michigan. A thespian, two-time 4-H blue-ribboner, and decorated member of the high school bowling team, he received his bachelor's degree in theater and global studies from the University of Wisconsin--Eau Claire and his master's in education from DePaul University. He lives in South Bend, Indiana, with his husband, Pete, and their two rescue dogs. I Have Something to Tell You is his first book.

When South Bend, Indiana Mayor Pete Buttigieg announced his bid for the U.S. presidency in January 2019, he and his husband, Chasten, had been married for just under seven months. And the campaign catapulted the newlyweds into the national spotlight. Suddenly, Chasten Buttigieg wasn't just a middle-school teacher, he was a bonafide Twitter celebrity whose tweets like, 'Peter: Crushing townhalls in SC Chasten: staring out the window waiting for UberEats,' quickly went viral.

Now, Buttigieg is reflecting on his meteoric rise in I Have Something to Tell You: his new memoir charting his life from growing up gay in the 1990s Midwest, to meeting and falling in love with Mayor Pete. While the memoir excavates the darker corners of Buttigieg's life — from the sexual assault he survived to the suicidal thoughts he experienced — its written in the refreshingly candid, relentlessly honest voice Americans have come to expect from Buttigieg.

In the end, I Have Something to Tell You is as optimistic and hopeful as Buttigieg's social media presence. Read on for an exclusive excerpt of one of the brightest spots in the book: Buttigieg's recounting of his first date with Mayor Pete.

I’d been talking to Peter for about a month when my friend Aubrey invited me to come visit her in Michigan. I figured seeing two people was a great reason to splurge and rent a car: I messaged Peter and said I’d be passing South Bend on I-94 — maybe we could have a date? He agreed to meet for coffee.

I was beyond nervous. Those FaceTime dates had gone so well, but I was just so tired of being let down. When the day finally arrived, I got stuck in traffic leaving Chicago, and, apologetic, I had to call him and say that we might have to cancel. I assumed that because he was mayor, he would really only have time for the afternoon coffee, but he was chipper and gladly told me he could wait to have dinner with me. (Later, his staff told me he’d been giddy the entire day, and he’d suspiciously canceled evening meetings.)

When I finally made it to South Bend, I (chivalrously) picked him up in front of his house. I rounded the corner and saw him standing on the steps waiting for me. My stomach was already in knots. When he opened the door, we both said, “Howdy” at the same time. Because of all the texting and FaceTime dates, it felt as if we already knew each other. He directed me to the Irish pub Fiddler’s Hearth in downtown South Bend, where he enthusiastically introduced me to Scotch eggs, which are softboiled eggs wrapped in sausage and then deep-fried. (Be still my Midwestern heart.) I intuited that my appreciation of Scotch eggs could be a make-or-break moment for him. Luckily, they’re delicious (yes, I realize in a gross way), so I passed that test.

Then, it was my turn to administer some tests of my own. So... I put it all out there. Although I was used to being forthright on first dates, I was sick of going on them, so this was a little extreme, maybe even counterintuitive. I described some of my bad dates, I said I wanted kids and marriage (Chasten, what were you thinking!), and I said I had just started grad school so I was broke most of the time. (I left out the mountain of student loans.) He kept smiling, laughing, and asking me to tell him more.

The meal had ended, but the conversation was just getting started. I was about to feel sad that our date was over when he pulled a pair of tickets out of his pocket and asked if I’d like to go to the baseball game down the street. I would. As we approached the stadium, I was quickly reminded that he was the mayor — a local celebrity, a guy everyone in town had an opinion about. He started getting approached for photos and chitchat; I had no idea what to do with myself. Sure, he was out now, but it didn’t seem appropriate to introduce your constituents to some guy you had met on a dating app and had seen in person one single time. I settled on awkwardly hovering too far away to have a conversation with anyone but close enough that it was kind of creepy. Once we made it to the concession stand, we both ordered drinks. When Peter’s arrived, the bartender told him, “It’s on the house tonight, Mayor.” Then, she gave me mine. “That’ll be eight bucks.” Before I could reach for my wallet, he paid, which was both a relief ($8 is a lot for a beer!) and a sign: he wasn’t ashamed to be on a date or trying to hide it.

We watched the game for a while, until he mentioned that every night there was a light show on the river, a marquee achievement of the revitalized South Bend. A walk by the river. Nighttime. Intrigue. Suspense. Romance.

As we were strolling along the river blanketed in a beautiful light display, I brushed my hand against his, and he took it. As we walked back to the car along the river, still holding hands, he told me about his city and why he had moved back.

When we finally made it back to my rental car, I realized I was super late to meet up with Aubrey. Initially, I’d told her I was stopping to have one drink and then I’d be on my way, but as that plan derailed, I kept texting her feverish updates.

Just as we made it back to the car, there were fireworks going off at the baseball stadium, lighting up the entire downtown sky.

I was soaring. It was like a made-for-TV movie. Once I finally got to Aubrey’s house in Michigan — sorry, Aubrey — she could not get me to shut up. But the next day I was apprehensive. I could tell Peter had put a lot of thought and strategy into the evening, which I admittedly loved (especially because it was after a last-minute change of plans!), but it also made me think: politician. I had grown up disliking politics, and even after my liberal awakening, I still wasn’t keen on politicians. I knew they were necessary, but they seemed more like a necessary evil than a necessary good. I assumed the kind of people who went into politics were distant, slimy, ladder-climbing egotists who make life harder for people who live, literally and spiritually, very far away from them. That it was more about status and favors than goodwill and change.

Good politicians are very few and far between. Peter seemed sweet, but even more than the other guys I’d been going out with, I wondered if his interest and curiosity were just lip service, and his amazing first date a strategy for making him seem like a nice guy. I didn’t want to be tricked, so I resolved to stay reserved. He’d also just come out, and the idea of eventually moving to Indiana for this guy—which, since he was the mayor of South Bend, was the only way it would work; he couldn’t pick up and move to Chicago—seemed way out of bounds. I mean, OK, I’m from Michigan, not exactly a hotbed of progressive politics and culture, but Indiana is something else. And even if I did like him, I assumed he’d want to play the field.

But we kept talking. And talking. And talking. Like it or not, I was getting really attached. I started spending long weekends in South Bend, and a few months in, Peter invited me to his regular Sunday evening dinners with his parents, Anne and Joe, who lived just around the block from him. Anne was gracious and welcoming from the get-go; I think she was just as excited that Peter had fallen in love as he was. Around their small table for four, Anne seated across from me, Peter across from his father, I watched as Joe overwhelmed Peter with a deluge of questions about the daily news or what was happening downtown at City Hall. Peter would ask him about his courses at Notre Dame. Anne and I would swap glances, and she’d raise her trademark single eyebrow that seemed to ask, “Don’t they know we’re here, too?” We couldn’t get a word in edgewise when Peter and Joe got to talking.

Once Joe would turn the conversation to me, however, the nerves arrived; Peter’s father was a professor, and I wanted to impress him. “Chasten!” he’d say. “What are you reading? Did you see that article about [insert topic] in the Times last Sunday? How are your parents?” “FAN-tas-TIC!” he would remark about just about anything, in his unique, not-quite-British accent. (Joe immigrated to the States from Malta in the ’70’s.) Even though I was intimidated by his intellect and his curiosity at first, it didn’t take long for Joe to make me feel welcome.

South Bend was quickly starting to feel like home. So less than six months after we had started dating, I moved in with Peter.

Excerpted from I HAVE SOMETHING TO TELL YOU published by Atria Books, a division of Simon & Schuster, Inc. Copyright © 2020 by Chasten Buttigieg.