Dragon 15 can upgrade profiles from Version 13 or 14. If you have such a profile, you should upgrade it and use it in Dragon 15; this allows you to benefit from refinements you had previously made, including acoustics, optional settings, and vocabulary, plus custom commands if applicable. 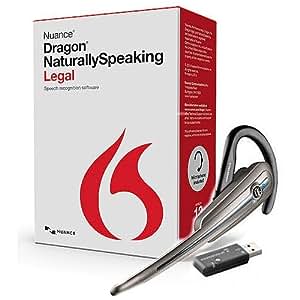 Dragon NaturallySpeaking Legal speech recognition software lets you dictate documents, send and manage email, and control your computer by voice — three times faster than typing. It includes a special language model to help you achieve optimal out-of-the-box accuracy when dictating legal terms. You can dictate into a handheld device; Dragon Legal will transcribe your audio files back at your PC.

Fast, Accurate Dictation
The time and cost involved in documenting case and client information continues to grow. Dragon Legal is the ideal solution for attorneys, support staff, and other legal professionals who want to work faster and smarter. Dictate naturally to create contracts, briefs, court document, email messages and more — three times faster than typing — with up to 99% recognition accuracy right out of the gate.

Works with Most Windows Applications
Use your voice to dictate, edit, and control virtually any Windows-based application, including most word processing, email, and case management programs.

Control Your Computer by Voice
Use simple voice commands to create files, send email, schedule meetings, open and close applications, save and convert documents and search the Web or your desktop faster than ever before.

Section 508 Certified
Dragon Legal can help organizations meet their disability management needs because it's Section 508 certified. Whether employees are permanently disabled or just in temporary rehabilitation, Dragon Legal can keep everyone on the job. Plus, by using voice to control the PC and create documents, users reduce their risk of developing repetitive strain injuries, such as carpal tunnel syndrome.

Eliminate Transcription Bottlenecks
Streamline your transcription and review workflow. Dragon Legal can monitor incoming audio files, automatically convert each file into a text document, and then route the audio and transcript text to support staff. Dragon’s Voice Notations feature allows the speaker to make “side comments,” such as specific instructions, that are saved as part of the recorded dictation but do not appear as part of the transcribed text.

Save More Time with Macros
Easily create special voice commands that let build and format document templates, insert frequently used text and graphics, or automate common workflow tasks like saving a document under a certain name, printing it, and attaching it to an email.

Boost Productivity on the Go
Use a Nuance-approved digital voice recorder — from anywhere, at anytime — and automatically transcribe text when you connect to your PC. Or simply use a wireless microphone with Dragon Legal at your PC so you can pace the office or access a file across the room without disrupting document creation.

Work in Hands- Free Comfort
Provide accessibility for workers with physical challenges and enable all employees to work in hands-free comfort. You’ll reduce incidences of repetitive stress injuries and keep more employees on the job while boosting productivity and satisfaction.

How Much Does Dragon Naturally Speaking Cost

System Requirements
The install process checks that your system meets the minimum requirements; if they are not met, Dragon NaturallySpeaking will not be installed.

Note: An internet connection is required for product activation (a quick anonymous process).
*This edition of Dragon does not support dictation directly into Electronic Medical Record (EMR) Systems. For EMR support, please use Dragon Medical Edition.

This product hasn't received any reviews yet. Be the first to review this product!