What: Honor Girl by Maggie Thrash 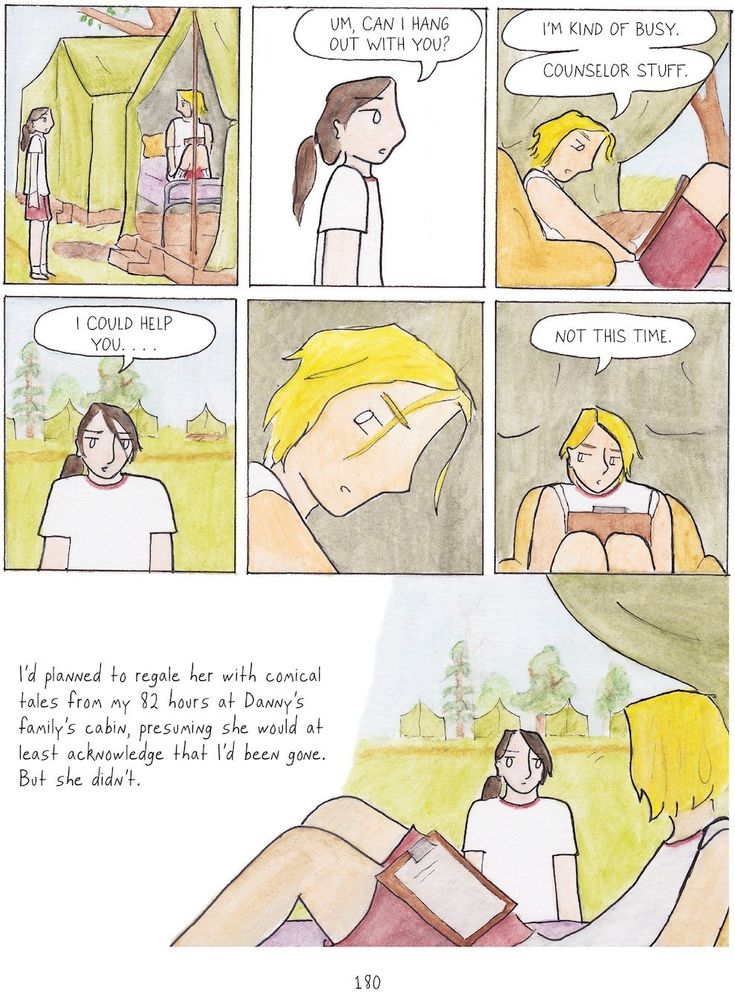 How: A copy of this novel was provided by Walker Books Australia for review.

All-girl camp. First love. First heartbreak. At once romantic and devastating, brutally honest and full of humor, this graphic-novel memoir is a debut of the rarest sort.

Maggie Thrash has spent basically every summer of her fifteen-year-old life at the one-hundred-year-old Camp Bellflower for Girls, set deep in the heart of Appalachia. She’s from Atlanta, she’s never kissed a guy, she’s into Backstreet Boys in a really deep way, and her long summer days are full of a pleasant, peaceful nothing . . . until one confounding moment. A split-second of innocent physical contact pulls Maggie into a gut-twisting love for an older, wiser, and most surprising of all (at least to Maggie), female counselor named Erin. But Camp Bellflower is an impossible place for a girl to fall in love with another girl, and Maggie’s savant-like proficiency at the camp’s rifle range is the only thing keeping her heart from exploding. When it seems as if Erin maybe feels the same way about Maggie, it’s too much for both Maggie and Camp Bellflower to handle, let alone to understand.

I read Honor Girl in about an hour, because I read graphic novels and manga volumes extremely quickly, and it was also really easy to immerse myself in the story that I was reading.

Maggie was a great character to read about (although, it feels weird calling her a character since it’s a memoir, but I’m going with it). She’s sarcastic and laid back, and I wanted to jump inside the book and become instant best friends with her. I completely understood her feelings for Erin, and how she felt like she was consumed by them, because I’m pretty sure we’ve all been there when we were teenagers.

Other than Maggie, I also liked her two friends (I think their names were Shannon and Rachel but I could be seriously wrong there). Rachel (or at least I think her name was Rachel) was a little younger than Maggie, and completely hyperactive. She guessed from the get-go that Maggie had feelings for Erin, and even though she teased Maggie about it a bit, she was a pretty loyal friend. Shannon was really similar to Maggie in the sarcastic and laid back kind of demeanour, and to be honest I kind of shipped them.

But other than that, I didn’t really like any of the other characters. The other girls at the camp were complete bitches, to say the least. They bullied Maggie, both verbally and physically, and I hated them. The camp kind of “mother” was a horrible homophobe, and I cannot believe that Maggie had to go through such a disgusting time when it came to that woman. The things she said. I just. I couldn’t. It hurt to read about, to be honest.

Erin. I felt like Erin was kind of weak. Maggie was scared to initiate anything between them, but Erin never did, either. And then when that ending came around, I was just shocked. My heart ached for Maggie. She had spent so much time and effort and feelings on Erin and then Erin just … didn’t do the same for her. I didn’t quite understand her character at all, and I thought that Maggie could do better.

The art was gorgeous in its simplicity, and the colours were divine. I really liked how I could see the difference between Maggie’s level of excitement about the camp (near to nil) and the other girls’ excitement about the camp (which was, fearfully, a lot). The whole thing is handwritten, but I really liked the sections in cursive (like the last page) – those lines really stood out from the rest, and brought an even more personal touch to Honor Girl.

All in all, I really did like Honor Girl. Even though I am a sucker for a happy ending and the ending of this story in no way appeased that side of me, I can also understand that happy endings don’t always happen in real life, and sometimes we are disappointed and left hanging. 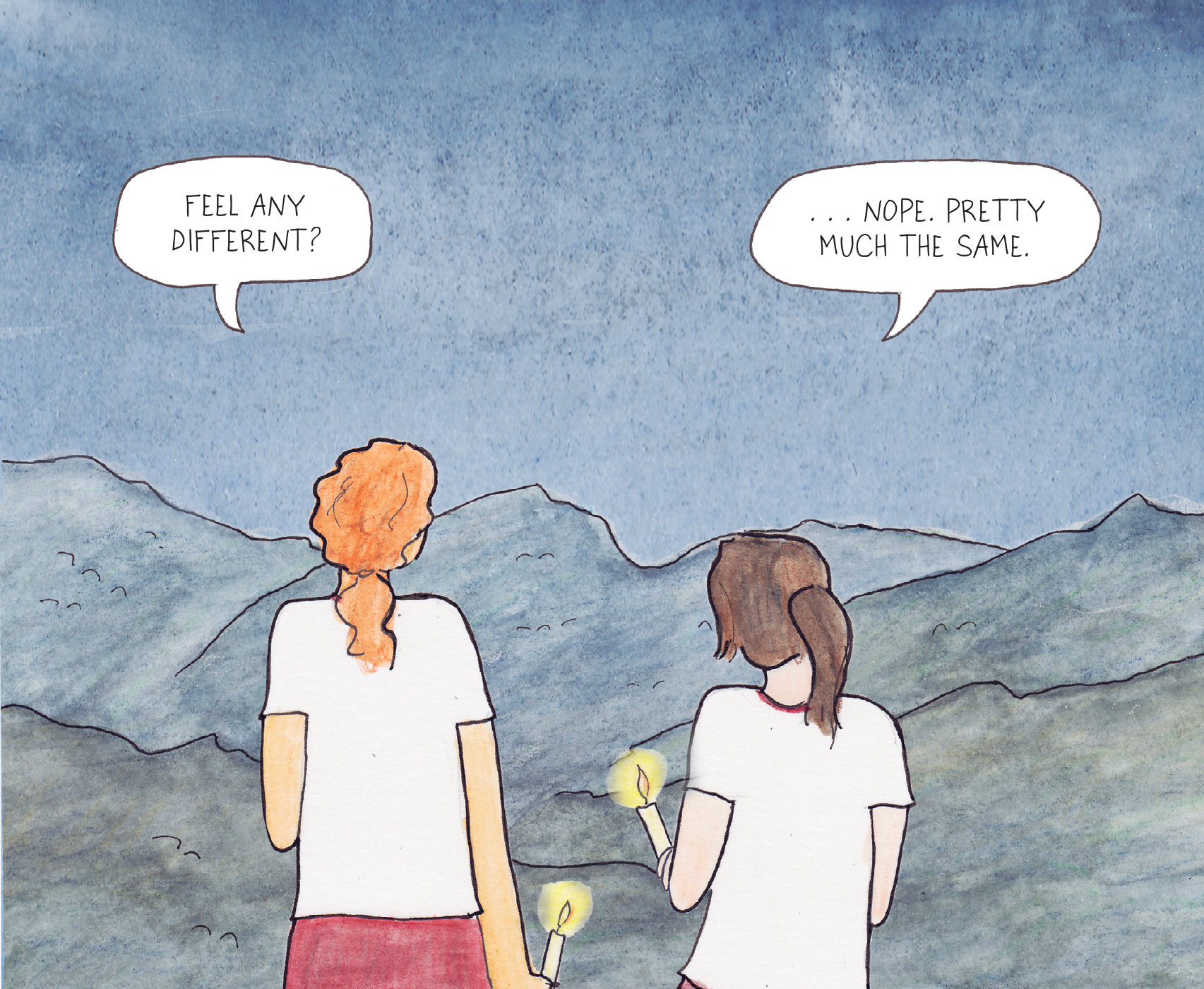 If you’re looking for a beautiful graphic novel about falling in love for the first time, then there’s no reason to not pick up Honor Girl.

© 2015, Chiara @ Books for a Delicate Eternity. All rights reserved.

trigger warning: homophobia in this novel

As I was reading this graphic memoir, I realized that I am probably not qualified to really review a graphic book. However, I love graphic stories and found Honor Girl to be an important book for our teens of today.

Maggie, aged 15, is attending girls camp in 2000. She crushes on Erin, 19, who is a camp counselor and openly gay. When Maggie discovers she likes Erin, and in turn realizing that she is gay as well, she only tells a few people at camp. Of course word gets around. She gets spoken to about “don’t ask, don’t tell” and that girls camp is really not a place for girls like her. She gets close to Erin at times but it doesn’t get past holding hands.

Outside of the romance, camp is filled with a lot of fun and interesting stories for Maggie. These include sleepwalking in the middle of the night, rifle practice and awards, as well as getting stranded during a flood that prevented them from going back across the river to camp.

Can a graphic book win the Printz? American Born Chinese won in 2007 and This One Summer won an honor last year. Thrash writes a honest, forthcoming story about what it was like, for one summer at least, to grow up a gay teen in a place that does not accept gays. The story itself draws you into Maggie’s world of summer camp and you want to know the outcome. The drawings are very simple. I had a hard time a few times distinguishing one blond girl from another. I felt that the drawings were complete and easy to understand. Thrash has a memoir that will reach today’s teens, especially speaking to those who are questioning their sexuality or have a friend doing so. Can it win the Printz? Again, I think there is a lot of competition but I wouldn’t put it past an Honor.

On a fun note, it was cool to discover that Maggie and I were the same age in the story (being 15 in the year 2000) and in love with Backstreet Boys. If you happened to have loved boy bands in the 90s, early 2000s, you should check out Maggie’s impersonation of Kevin Richardson.