Isaac Asimov was one of our most beloved authors, and when he died in 1992 at the age of seventy-two he left behind an unapralleled legacy of thought and imagination. In a career that lasted more than fifty years, he wrote more than 470 books and innumerable articles and short stories, winning the hearts of millions of readers around the world. Perhaps best known as one of science fiction’s founding fathers, he wrote the novels that defined the genre and went on to become its all-time bestselling voice. But more than that, Isaac Asimov was one of the most wide-ranging minds of the this century, and he earned the nickname the Great Explainer for his non-fiction works on subjects ranging from the nature of the universe to Byron’s Don Juan. In these memoirs, he looks back on a long and very full life, and discusses subjects he has never before addressed. Exuberant, topically arranged, and richly anecdotal, I. Asimov shines with the author’s incomparable personality.

The story of Isaac Asimov’s life is an illustrious twentieth-century odyssey. The beginnings of his writing career were the beginnings of science fiction, and he writes of that time—the golden age of pulp fiction—with warmth and candor. As Asimov’s fame grew, so did his contacts with other science-fiction writers, and his circle of friends became a veritable Who’s Who of science-fiction greats. He reminisces fondly about the people who played important roles in his life, among them Arthur C. Clarke, Frederik Pohl, John W. Campbell, Jr., Robert A. Heinlein, L. Sprague de Camp, Clifford Simak, Harlan Ellison, Ben Bova, Lester and Judy-Lynn del Rey, Robert Silverberg, and Martin Greenberg.

A man of great humor, bonhomie, and vision, Asimov made friends in all walks of life and traded ideas with some of the great minds of his time. His renown as a science-fiction writer and disseminator of modern scientific thought attracted speaking invitations of all kinds, and I. Asimov brims with delightful (and delightfully embarrassing) vignettes from a lifetime of public oration. These memoirs provide an unflinching look into the inner recesses of Isaac Asimov’s personal life, including his views on religion, love, divorce, children, death, and much more; they also offer a window into the formation of the famed “Asimov Style” that enabled him to become the most prolific writer of our time.

Moving, funny, and utterly irresistible, I. Asimov is a fitting retrospective of a singular life and career.

Although larded with thin filler material, Asimov's uneven posthumous autobiography also contains some of his liveliest, most incisive writing. The prolific SF novelist and nonfiction author, who died in 1992, discusses working in his father's candy store during the Depression, his unhappy first marriage and bitter divorce, his fulfilling second marriage and his dislike of children, which did not inhibit him from fathering a son and a daughter. We also learn of Asimov's fear of high places, his claustrophilia (his penchant for enclosed, artificially lit places), his compulsion to be prolific and the heart disease of his final years. Filled with cameos of well-known science fiction writers and editors, the narrative is peppered with Asimov's freewheeling thoughts on the Bible, teenagers, Sherlock Holmes, death, censorship and much else. Fans will enjoy his entertaining conversational mix of puckish humor, verve and self-revelation. Photos not seen by PW. (Apr.) 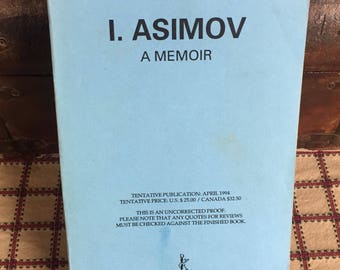 I Asimov A Memoir Pdf