One of the most popular questions which people have is how low can their oxygen level go before they die. There are various reasons behind asking the question. One of the reasons is before going mountain climbing or even swimming. An understanding of how low a person’s oxygen level can go will allow them to make the right decisions to stay alive and healthy.

As mentioned in previous articles sleep apnea is a serious condition which many people suffer from. Knowing about the oxygen level can help people with the condition.

What is Sleep Apnea?

It is a critical sleep disorder where people experience their breathing stopping and starting repeatedly. You might even have sleep apnea if you snore loudly and experience exhaustion after a good night’s sleep. The most common type of sleep apnea occurs when the throat muscles relax, known as obstructive sleep apnea.

Breathing properly is vital and long-term sleep disorders have serious health implications such as an increase in the incidence of heart problems, diabetes, and high blood pressure.

What is the normal and low oxygen level?

Oxygen level drops to 80 percent or less due to not breathing for 30 seconds or more when sleeping. Anyone that has an oxygen level under 90 percent requires intervention as it is dangerously low for the body. The brain only has the ability to survive for up to 4 minutes if oxygen gets completely cut off.

The upper airway muscle tone during sleep tends to be narrow which makes it collapse temporarily in sleep apnea patients. As this happens, the breathing would stop along with a drop in blood oxygen levels. You will feel tired during sleep since the oxygen levels would drop, contributing to restless sleep. The carbon dioxide levels would start to build up as the oxygen levels drop. Sleepiness, fatigue and morning headaches would be felt during the day due to this.

How does Oxygen Levels Due to Sleep Apnea Impact the Body?

If the blood oxygen levels drops below 92 percent, it is considered to be abnormal. However, what is more, important to be considered is the amount of time spent with the abnormal oxygen levels and the number of desaturations. But, if the desaturated levels below 92 percent are experienced just once or twice within a 7 hour sleeping period and if it lasted for just a few seconds, then it is nothing to worry about. Experiencing long low oxygen levels, on the other hand, will seriously affect your health. It leads to the following.

How to monitor your Blood Oxygen Levels?

Now, normally it will your doctor who will discover that your blood oxygen levels are low or under the minimum 90 percent requirement. It is probably due to the oxygen levels dropping in the night. Sleep apnea is the cause of this or any other respiratory disorder such as UARS. Overnight monitoring would be recommended by the doctor for your oxygen levels using the oximeter that would be attached to the finger. Oxygen levels will be recorded by this device along with the pulse rate as you sleep.

It is important to follow up with the sleep study to ensure that the right actions are taken. Your short term memory and other cognitive functions would be damaged, as well as a heart attack and stroke in your sleep would occur with a continued drop in oxygen levels.

Anyone that has sleep apnea would use a CPAP machine to be treated. Oxygen levels will improve and return to normal levels if apnea episodes disappear. Sleep apnea is a serious condition with severe consequences, it is vital to get treated as early as possible.

Heart Failure IS -> Progressive weakening of your heart muscle! (Read that sentence again. It is that important.)

The world is facing an epidemic of heart failure! This ONE health crisis will rob more productive work years from Americans than any other.

Why should you be concerned about oxygen?

Oxygen isn’t typically something you worry about. If you are looking into “low oxygen levels”, you likely heard the term from your doctor. As the caregiver of a loved one, you
might become familiar with the importance of oxygen as a life saving requirement, but fail to realize how effective it can be in minimizing discomfort and maintaining quality-of-
life.

Everyone worries about high blood pressure, carrying extra weight and other issues routine blood work can reveal. It’s all part of the natural aging process and your growing
concern for your health. After all, you don’t ignore your bad health until it kills you if you know better, right?

Being over-weight increases your risk for many diseases, especially heart disease. So, you diet and attempt to get “regular exercise”. Maybe you join a gym, or consider
gastric bypass surgery. You do what it takes because health is important.

High blood pressure is called the silent killer, because it can be deadly without symptoms. Most people know that it’s important to get their blood pressure checked
regularly, just to be safe. 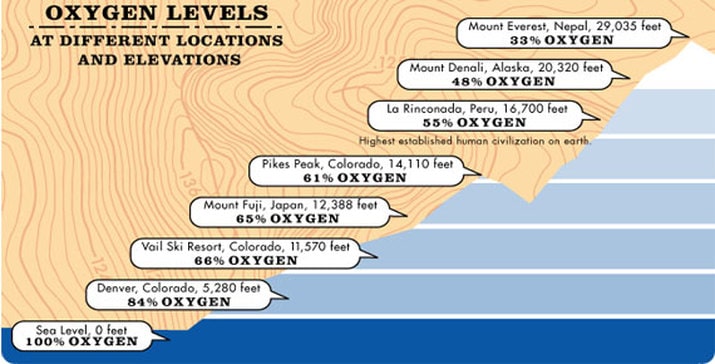 There are plenty of risk factors to worry about. Why add oxygen to the list?

If your doctor is expressing concern about your blood oxygen levels, you should be concerned, too.

You may be inclined to argue with your doctor if he/she would like to see you using oxygen 24 hours a day. It’s fair to say that round-the-clock oxygen therapy is inconvenient and irritating.

It’s also difficult to understand why it is necessary.

What is there to be concerned about?

Since low-flow home-oxygen is completely safe and doesn’t cause side-effects you are better off to use it than to resist using it and suffer the consequences of low blood oxygen. It isn’t an easy to swallow pill, but it might just be more important than every pill in your pill box.

Oxygen is one prescription you don’t want to second guess.

If your doctor wants you on oxygen, you are crazy to argue.

Does your doctor monitor your blood oxygen levels routinely?

Not all doctors have oximeters (oxygen measuring devices) in their office. If they don’t have one, they have no way to routinely monitor your oxygen level during your physicals, check-ups and illness related appointments.

This isn’t at all unusual. Even if doctors have oximeters, they may not use them unless you have some sort of breathing complaint. It isn’t widely understood, even with doctors, that low oxygen is most often NOT accompanied by shortness-of-breath.

It isn’t at all uncommon for doctors and nurses to minimize the importance of oxygen therapy and to dismiss low oxygen readings if they only last a short period of time.

This approach is much like waiting for things to get worse.

Whether your doctor monitors your blood oxygen level or not, YOU SHOULD.

There is no doubt about it. Taking an active role in your health care can cause you more stress than putting blind trust in your doctor, but if your doctor doesn’t offer you thesolution you need, who will?

Doctors are making educated guesses and doing the best they can. Luckily they also have the benefit of a well educated team with many years of combined experience. Good health care requires team work. It can be tempting to allow your doctor to lead the team but NO ONE is more motivated and invested in finding solutions to your suffering than YOU are.

It’s important for you to be aware that your participation is the key to positive results.

Certainly, if your health care team doesn’t successfully uncover the cause of your suffering and eliminate it or otherwise address it, you are the only one who will suffer the consequence. Ultimately, you pay the price for oversights and mistakes.

If your doctor is advocating for oxygen therapy, you are fortunate. Most doctors overlook the harm low oxygen levels are causing and shrug off the importance of monitoring and meeting oxygen needs.

Good quality-of-life is your goal. The damage caused by low oxygen levels prevents you from functioning the way you normally would. How much joy would you lose if your
eyesight slowly deteriorated?

Once you know you are living with congestive heart failure, you should understand that oxygen is the key to protecting your weakened heart muscle and to strengthening it.

Low oxygen is a BIG deal.

So how low is too low?

1. When oxygen saturation levels fall below 92%, the pressure of the oxygen in your blood is too low to penetrate the walls of the red blood cells. It is a matter of gas laws.

2. Your insurance company may not pay for oxygen unless your levels fall to 88% oxygen saturation. This has nothing to do with what is best for you, it is just the point at which your insurance is willing to pay.

3. Every time your oxygen level falls below 92% saturation the cells of your body are oxygen starved.

4. When you fail to meet your oxygen needs, every organ in your body suffers the consequences.

5. Low oxygen levels may be present only at certain times.

6. Recurring low oxygen levels are harmful and should be treated with supplemental oxygen.

7. The problem is that your doctor may not witness your oxygen levels at 88%, and if he doesn’t see that reading on an oxygen meter (oximeter), then most insurance companies will not pay for it, and therefore doctors don’t order it.

Low oxygen levels are definitely something to worry about!

If you feel you may be experiencing low oxygen levels be sure to ask your doctor to check your pulse oximetry reading.

Symptoms of low oxygen are:

If you are experiencing blood oxygen saturation levels below 92% now, waiting for your doctor to witness it below 88% and order oxygen is equal to sitting around waiting to get worse.