The function of the aviation piston engine ignition system is to provide an electrical spark to ignite the fuel/air mixture in the engine cylinders. The ignition system of the engine is a separate system and is not part of the airplane’s overall electrical system. The magneto type ignition system is used on most reciprocating aircraft engines. Magnetos are engine-driven self-contained units that supply electrical current without using an external source of current. Magnetos are frequently not maintained to requirements specified in L1363 Manual- 4300/6300 Series Magneto Maintenance and Overhaul Manual, probably because they’re so reliable and all engines have a redundant magneto. Magnetos need regular maintenance, and the consequences of neglect can be devastating.

Modern airplane engines are required by to have a dual ignition system – that is, two separate magnetos to supply the electric current to the two spark plugs contained in each cylinder. One magneto system supplies the current to one set of plugs, while the second magneto system supplies the current to the other set of plugs. The airplane’s double ignition system provides better performance because of more efficient combustion and a higher level of safety through redundancy.

Champion Slick magnetos have applications on nearly all piston engines and are known for the following design features:

Slick magnetos are engineered so that mechanical parts wear at a balanced rate. Consistent and complimentary wear patterns establish the recommended maintenance intervals defined in Champion Aerospace service literature, so used and service-worn parts should never be used to troubleshoot or repair a magneto, nor should original parts be replaced by used service worn parts on magnetos being returned to service.

Genuine Champion Aerospace parts are produced and inspected under rigorous procedures to ensure airworthiness and suitability in Slick magnetos. Parts purchased from sources other than Champion Aerospace (even though outwardly identical in appearance) may not have had the required tests and inspections performed, may be different in fabrication techniques and materials, and may be dangerous when installed in a Slick magneto. Salvaged magneto parts, reworked parts obtained from non-Champion Aerospace approved sources, or parts the service history of which is unknown or cannot be authenticated may have been subjected to unacceptable stresses or temperatures or have other hidden damage, not discernible through routine visual or usual nondestructive testing techniques. This may render service work with this part, even though originally manufactured by Champion Aerospace, unsuitable or unsafe for use in a Slick magneto. Champion Aerospace expressly disclaims any responsibility. 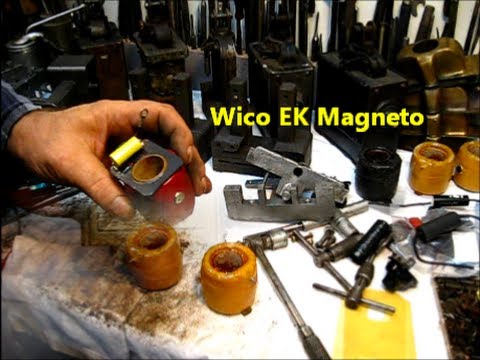 Slick magnetos can also be economically serviced at 500-hour intervals. To ensure their reliability, all AD’s are complied with and the following high wear parts are replaced:

For aircraft that operate in demanding environments, use Champion SlickSTART™ technology. Cold Start, Hot Start, Any Start- SlickSTART™. SlickSTART unleashes a firestorm of ignition energy to get your engine started under the worst environmental conditions. SlickSTART is so effective, even sub-optimal fuel mixtures and seriously fouled spark plugs won’t stop the capacitive discharge output from providing the ignition boost your engine needs for reliable starts under demanding conditions. SlickSTART’s sure starting power:

Here at Quality Aircraft Accessories, we specialize in aircraft magnetos and aircraft magneto service. We take pride in our wide breadth of knowledge surrounding aircraft parts and thought we'd share some of that expertise to provide a better understanding of just what an aircraft magneto is and how one works.

An aircraft magneto is an engine driven electrical generator that uses permanent magnets and coils to produce high voltage to fire the aircraft spark plugs. Aircraft magnetos are used in piston aircraft engines and known for their simplicity and reliability. Often sold in pairs, or as a dual magneto, this compact device requires no external electrical source to operate.

There are various models of aircraft magnetos, so understanding which one your engine requires is important. Two of the most common are the Slick Magneto by Champion Aerospace and the Bendix Magneto by Teledyne. These aircraft magnetos are well known across the industry and come from trusted and reputable manufacturers.

Quality Aircraft Accessories also carries the entire line of Champion aircraft magnetos, and we offer 500 hour inspection, new, overhaul, and repair services. Give us a call to help you with your aircraft needs or to find out even more details about an aircraft magneto and which type you require. We have an extensive core aircraft inventory that ensures even the 'hard to find' aircraft magnetos are in stock.

If there's more you'd like to learn about aircraft magnetos and other aircraft parts, visit our Aircraft Magneto and Aircraft Parts resource pages to find the answers you're looking for!

What Are Some Top Recommended Aircraft Magneto Products?

There are many kinds of aircraft magnetos out there, and knowing which brands and models you can trust will keep you one step ahead. The Bendix Magneto by Teledyne is one such aircraft magneto due to its efficiency and reliability. Here are some of our top recommended Bendix magneto products:

These aircraft magnetos have been tried and tested throughout the years, proving to be products worthy of their reputation. Click on any of the above Bendix magneto links to find out more about each, or shop our entire selection of Aircraft Magnetos at our online store.