Office for ‌iPad‌ is free to use for iPad Air, ‌iPad‌, and iPad mini users, but requires an Microsoft 365 subscription to make full use of all features. Microsoft offers a month's free trial to Office 365, but after that it costs £5.99 ($6.99, AU$7) per month for a Personal account. The Office apps store files, by default, in OneDrive, Microsoft. Microsoft has finally introduced trackpad support for Office Microsoft 365 on the iPad.

The update – which covers Word, PowerPoint, and Excel – is designed to help these apps more closely resemble their desktop counterparts when it comes to things like selecting text, resizing page elements, grouping spreadsheet cells, and so on.

The tweak fulfils a promise made by Microsoft earlier this year to add improved cursor support in its iPadOS Office apps, and will roll out to customers over the coming fortnight.

Apple proved somewhat reluctant in bringing mouse and trackpad compatibility to the iPad. It first appeared as an accessibility feature intended for those unable to use a standard touch interface, and was not positioned as something intended for routine day-to-day usage. That messaging changed earlier this year, with the launch of iPadOS 13.4, which added full mouse and trackpad support.

Apple later expanded upon this with the Magic Keyboard for the iPad Pro – an excellent if arse-clenchingly expensive trackpad and keyboard combination for the 11-inch and 12.9-inch iPad Pro. Third-party manufacturers have also had a go, notably Logitech, with its also-solid new Combo Touch case. We have one, and will be publishing a review in the coming weeks.

Hardware isn't the problem here. The biggest Achilles' heel when it comes to cursor support on iPadOS is the woeful lack of consistency among apps. This becomes apparent when doing basic tasks like copying and pasting.

Some apps allow you to select text with the cursor. Others require you to tap-and-drag the screen, like you would with an iPhone. It's exactly as infuriating as it sounds, and it feels like a massive oversight for a company that once took pride in its meticulous attention to detail.

The update to Office 365 shows that when it comes to resolving this, the onus is on individual developers, rather than Apple itself. While cursor support will become more widespread in the coming years as more people use their iPads as laptops, punters will have to suffer this inconstancy for a while longer. ® 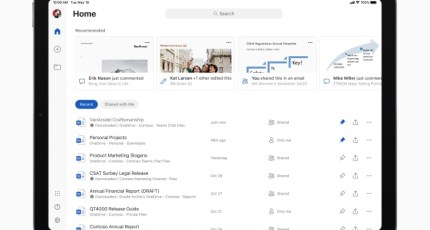