Do you happen to have a desk full of post-it notes?

How about project information and research scattered about?

Or do you have a project that you and a few others are working together on?

One of the easiest ways to collect, organize, and collaborate with information is Microsoft OneNote!

Think of OneNote as a virtual notebook, with multiple tabs & pages. (see figure 1)

Once the information is inside of OneNote you may search across all notebooks, tabs, and pages instantly.

Think of OneNote not as a document creator, but as a place to collect and organize data.

Sharing among your devices

Does Onenote Work On Android

Where OneNote really shines is its ability to sync across all of your devices by use of Microsoft OneDrive.

Figure 2 – OneDrive “Cloud” Allows Synchronization between all of your devices

OneDrive gives you the ability to sync without the need of complicated and cumbersome VPN’s or on premise servers.

Once setup you can easily share your notebooks among your desktop, laptop, tablet, and cell phone.

These devices can then all sync your notebooks and any changes automatically and effortlessly using Microsoft OneDrive. (See Figure 2)

So you can access and add to your information using your cell phone and tablet when you’re away from your desk. (Cell phone view shown in Figure 2)

Tablets (iPad shown) give you the ability to even write right directly on the pages. (See Figures 4,5)

As you can likely realize OneNote & OneDrive’s ability to sync across devices can be extremely useful. These systems also have the ability to share notebooks with other employees, or even outside team members. This allows teams to work together and collaborate on the same notebook, without the need to re-download, re-email, etc. etc. Everyone’s work comes together real time, making it a very efficient tool.

The pictures I’ve shared with you in this article are of an actual notebook that myself and two others used to organize a 6-day hiking trip of the High Sierra Trail, where we would also summit Mt. Whitney (The tallest mountain in the lower 48 states). The notebook was shared out among the three of us, so we could all view, contribute, and complete a plan. Given the potential dangers, it was crucial we all knew what our plan was.

To accomplish this, I started a new separate notebook to share out. Please note that you cannot share individual tabs or pages, sharing is setup for the entire notebook. I added my two friends, one who has Microsoft OneNote – one who did not. (See Fig. 6) 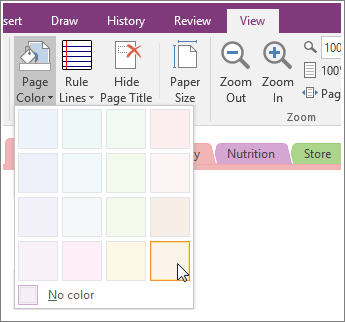 I gave both of them editing privileges since they both would need them, but also had the option of giving “read-only” access. This would be handy in this situation if we wanted to give a worried mother or wife read-only access to our plan.

My two friends were emailed a link when I added them to the document sharing screen. As I mentioned earlier, one of them also had OneNote installed on his desktop, cell phone, laptop, and tablet. Once he clicked on that link these devices all synced the notebook directly from my OneDrive account. There was no need for him to download / import / export / etc / etc.

My other friend did not have the privilege of having Glassen Consulting & Automation setup his IT systems (shameless plug). However, this was not an issue, since OneNote Online was available to him. Directly from his web browser, he was able to work in the notebook! (See Fig. 7)

OneNote and OneDrive was a very valuable tool for our group. It allowed us to collaborate on a large amount of data without the need for long calls or meetings. The example I used here today was a personal example of using OneDrive to synchronize and share Microsoft OneNote, but there are many corporate applications for this system. Our team at GC&A uses OneNote to collect research and information for special projects, client projects, marketing, R&D, and even technical notes on a daily basis. Contact us today to learn how we can get your company setup today!

Is Onenote Free On Android

Oh, and yes – We made it to the top. We even used OneDrive to share and combine each other’s pictures from the trip.

Panoramic View from the top

Another view from the top

This article details best practices for moving and syncing OneNote notebooks, as well as issues that may arise if notebooks are moved or synced in ways that are not recommended. In general, OneNote notebooks should always be synced and moved by the OneNote application, and not by file based synchronization systems such as a client application (such as the OneDrive or DropBox local client) or offline folders. Reasons for moving and syncing notebooks via OneNote include:

Move local notebooks to a cloud location (Recommended Method)
If you have a notebook stored locally on your computer that you wish to move to the cloud, go to File > Share in OneNote and pick a web location such as OneDrive, and then click Move Notebook.
OneNote will upload the notebook to OneDrive and set up direct sync.
When the notebook has been successfully moved, the following message will appear:
After the notebook has been moved, the local notebook in the previous location is no longer connected or synchronized and should be deleted. You may use the OneDrive client application to move and synchronize other files, and OneNote will handle the syncing of notebooks within OneDrive automatically.
Not Recommended
Do not use Windows Explorer to move folders containing .one files to OneDrive. If notebooks are moved to the local OneNote client folder in this manner, when they are opened in OneNote 2013 you will receive the error 'This notebook may not sync correctly because another program is syncing these files. Click here to re-open this notebook from the correct location.'
Clicking on this error message in OneNote 2013 will allow OneNote to move the notebook to OneDrive and establish a sync relationship. As a part of this process, OneNote will delete the original folder and all .one/.onetoc2 files and replace them with an internet shortcut file. This behavior is by design, as all OneNote notebooks are represented as internet shortcuts within the OneDrive client application so that the OneDrive client allows OneNote to perform the syncing of the file. However, no data is lost during this process.
However, previous versions of OneNote were created prior to the existence of the OneDrive client application. As such, no error messages are surfaced in this scenario and the user can potentially encounter the issues described above when OneNote is not responsible for syncing content. Users with older versions of OneNote should follow the steps in the Recommended section to move notebooks into OneDrive to resolve this problem.