An 'environment' in Python is the context in which a Python program runs. An environment consists of an interpreter and any number of installed packages. The Python extension for VS Code provides helpful integration features for working with different environments.

As of May 2019, Microsoft released the Python Extension for Visual Studio Code. In this post, we are going to show you the beginner steps to configure the interpreter, execute and debug a sample. Python Tools for Visual Studio allows you to use an existing Python interpreter, such as CPython, IronPython, PyPy. It supports a broad range of features from editing with IntelliSense to interactive debugging, profiling, interactive REPLs with support for IPython, cross-platform and cross-language debugging support, and deployment to Microsoft Azure.

Since Visual Studio Code can use whichever version of Python in your system, you need to install modules for that specific version used. Once you realize this, solution is straightforward, just install module with pip using the same version of Python chosen as interpreter (Figure 2) using directly python.exe correct version as shown in Figure 3. Visual Studio Code (VSC) is a free cross-platform source code editor. The Python for Visual Studio Code extension allows VSC to connect to Python distributions installed on your computer. Python code insights. Visual Studio IDE analyzes your code to make suggestions. Manage 3rd party libraries. Interativey debug on Windows and Linux.

Select and activate an environment

To select a specific environment, use the Python: Select Interpreter command from the Command Palette (⇧⌘P (Windows, Linux Ctrl+Shift+P)).

You can switch environments at any time; switching environments helps you test different parts of your project with different interpreters or library versions as needed.

Note: On Windows, it can take a little time for VS Code to detect available conda environments. During that process, you may see '(cached)' before the path to an environment. The label indicates that VS Code is presently working with cached information for that environment.

The Python extension uses the selected environment for running Python code (using the Python: Run Python File in Terminal command), providing language services (auto-complete, syntax checking, linting, formatting, etc.) when you have a .py file open in the editor, and opening a terminal with the Terminal: Create New Integrated Terminal command. In the latter case, VS Code automatically activated the selected environment.

Tip: To prevent automatic activation of a selected environment, add 'python.terminal.activateEnvironment': false to your settings.json file (it can be placed anywhere as a sibling to the existing settings).

Note: By default, VS Code uses the interpreter identified by python:pythonPath setting when debugging code. You can override this behavior by specifying a different path in the pythonPath property of a debug configuration. See Choose a debugging environment.

The Status Bar also reflects when no interpreter is selected.

In either case, clicking this area of the Status Bar is a convenient shortcut for the Python: Select Interpreter command.

Tip: If you have any problems with VS Code recognizing a virtual environment, please file an issue in the documentation repository so we can help determine the cause. 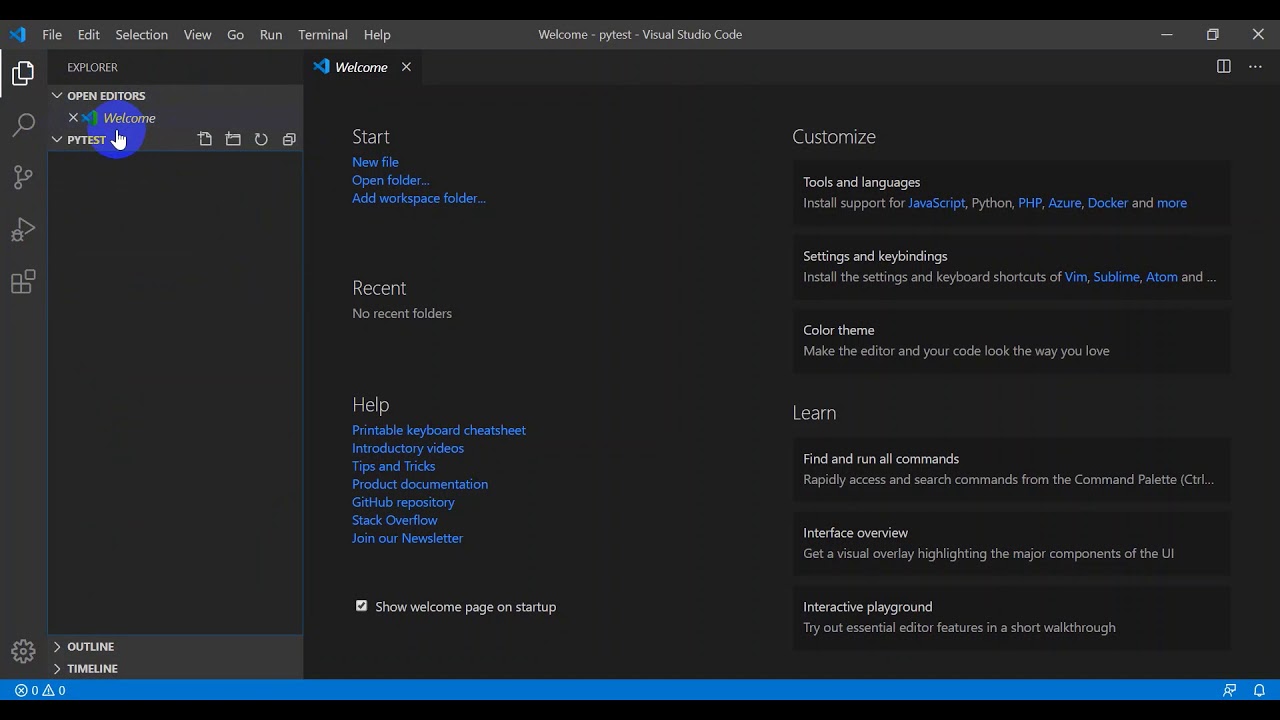 After using Python: Select Interpreter, that interpreter is applied when right-clicking a file and selecting Python: Run Python File in Terminal. The environment is also activated automatically when you use the Terminal: Create New Integrated Terminal command unless you change the python.terminal.activateEnvironment setting to false.

Changing interpreters with the Python: Select Interpreter command doesn't affect terminal panels that are already open. You can thus activate separate environments in a split terminal: select the first interpreter, create a terminal for it, select a different interpreter, then use the split button (⌘ (Windows, Linux Ctrl+Shift+5)) in the terminal title bar.

Where the extension looks for environments

The extension automatically looks for interpreters in the following locations:

You can also manually specify an interpreter if Visual Studio Code does not locate it automatically.

Note: Once the 'select interpreter' flow is triggered, pipenv environments for the workspace folder will be searched for. If one is found, then no other interpreters are searched for or listed as pipenv expects to manage all aspects.

The extension also loads an environment variable definitions file identified by the python.envFile setting. The default value of this setting is ${workspaceFolder}/.env.

By default, any Python interpreter that you've installed runs in its own global environment, which is not specific to any one project. For example, if you just run python (Windows) or python3 (macOS/Linux) at a new command prompt, you're running in that interpreter's global environment. Accordingly, any packages that you install or uninstall affect the global environment and all programs that you run within that context.

Although working in the global environment is an easy way to get started, that environment will, over time, become cluttered with many different packages that you've installed for different projects. Such clutter makes it difficult to thoroughly test an application against a specific set of packages with known versions, which is exactly the kind of environment you'd set up on a build server or web server.

Note: While it's possible to open a virtual environment folder as a workspace, doing so is not recommended and might cause issues with using the Python extension.

To create a virtual environment, use the following command, where '.venv' is the name of the environment folder:

When you create a new virtual environment, a prompt will be displayed to allow you to select it for the workspace.

If the activate command generates the message 'Activate.ps1 is not digitally signed. You cannot run this script on the current system.', then you need to temporarily change the PowerShell execution policy to allow scripts to run (see About Execution Policies in the PowerShell documentation):

Note: If you're using a version of the Python extension prior to 2018.10, and you create a virtual environment in a VS Code terminal, you must run the Reload Window command from the Command Palette and then use Python: Select Interpreter to activate the environment. If you have any problems with VS Code recognizing a virtual environment, please file an issue in the documentation repository so we can help determine the cause.

In contrast, if you fail to specify an interpreter, as with conda create --name env-00, the environment won't appear in the list.

If VS Code does not automatically locate an interpreter you want to use, you can set the path to it manually in your Workspace Settings settings.json file. With any of the entries that follow, you can just add the line as a sibling to other existing settings.)

Then do any of the following steps:

By default, the Python extension looks for and loads a file named .env in the current workspace folder, then applies those definitions. The file is identified by the default entry 'python.envFile': '${workspaceFolder}/.env' in your user settings (see General settings). You can change the python.envFile setting at any time to use a different definitions file.

A debug configuration also contains an envFile property that also defaults to the .env file in the current workspace (see Debugging - Set configuration options). This property allows you to easily set variables for debugging purposes that replace variables specified in the default .env file.

For example, when developing a web application, you might want to easily switch between development and production servers. Instead of coding the different URLs and other settings into your application directly, you could use separate definitions files for each. For example:

where ... means any other text as used in the value. The curly braces are required.

Within this syntax, the following rules apply:

Use of the PYTHONPATH variable

The PYTHONPATH environment variable specifies additional locations where the Python interpreter should look for modules. In VS Code, PYTHONPATH can be set through the terminal settings (terminal.integrated.env.*) and/or within an .env file.

When PYTHONPATH is set using an .env file, it will affect anything the extension does on your behalf and actions performed by the debugger, but it will not affect tools run in the terminal.

If needed, you can set PYTHONPATH using both methods. 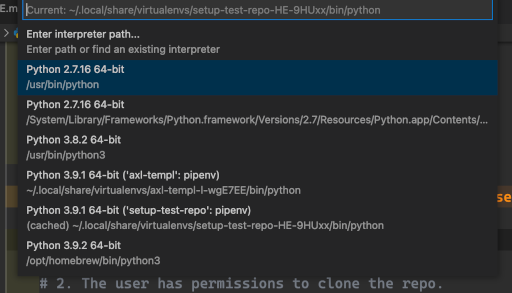 An example of when to use PYTHONPATH would be if you have source code in a src folder and tests in a tests folder. When running tests, however, those tests can't normally access modules in src unless you hard-code relative paths. To solve this problem, add the path to src to PYTHONPATH.

The value of PYTHONPATH can contain multiple locations separated by os.pathsep: a semicolon (;) on Windows and a colon (:) on Linux/macOS. Invalid paths are ignored. If you find that your value for PYTHONPATH isn't working as expected, make sure that you're using the correct separator between locations for the operating system. For example, using a colon to separate locations on Windows, or using a semicolon to separate locations on Linux/macOS results in an invalid value for PYTHONPATH, which is ignored.

Note: PYTHONPATH does not specify a path to a Python interpreter itself, and should not be used with the python.pythonPath setting. For additional information about PYTHONPATH, read the PYTHONPATH documentation.

I’ve been doing some experimenting with pipenv to simplify my nascent Python programming workflows and also with Visual Studio Code as a cross-platform code editor. So naturally I want VS Code to use the python version from my pipenv-based virtual environment (as one does). I also want the compiled .pyc files to not show up in the explorer view. Fortunately, both of these things can be accomplished by overriding some default VS Code settings.

First, find out where pipenv has created your virtualenv setup and stashed the python executable you are using. From the command line in your project folder (where your Pipfile is), execute the following:

This will give you the full path to your virtualenv python install. For my sample project it was/Users/pack/.local/share/virtualenvs/astra-AQkAm5fD/bin/python

Now, create a local settings file that VS Code will use for your project

After executing that, you’ll want to open the settings.json file and paste in the following:

The files.exclude block takes the existing VS Code settings for files not displayed and adds .pyc files and __pycache__ folders to the list. The python.pythonPath variable is where you need to include the virtualenv python location that you found earlier.

Now when you load up VS Code with your project, it will use the appropriate Python version. If you also have pylint installed in your virtualenv environment then it will use that version to display any linting problems. If not, you can do that with the following.