The Glass Castle is a memoir written by journalist, Jeannette Walls. Jeannette writes about her unique childhood, sharing her fond memories of her father and mother. She tells how they refused to conform to society's ideas of responsibility, leaving their children to fend for themselves for even the most basic of needs, such as food and shelter. Jeannette tells her story in a straightforward fashion that is not touched with anger or self-pity, belying events that often shock her readers with her almost innocent presentation of the facts. The Glass Castle is an astonishing memoir that will leave the reader both stunned by the tragic circumstances of Jeannette's childhood and awed by her strength. 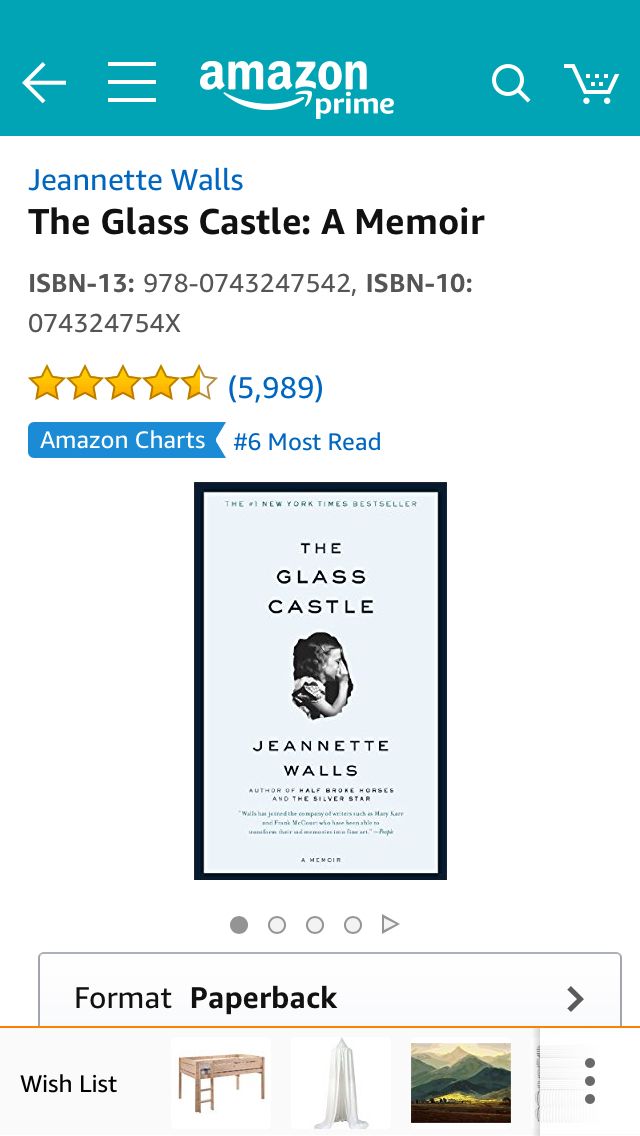 Jeannette was three when she burned herself boiling hotdogs for her lunch. Jeannette's mother took her to the hospital for treatment despite her father's protests. Jeannette enjoyed the hospital because it was so clean. There was television and all the nurses were very nice to her. However, her father no longer thought she belonged there. One night simply picked her up and stole her away against medical advice. This was the way her father did things. He simply picked up and moved on when he did not like the situation.

The Walls family moved often. Jeannette's father, Rex Walls, did not like to stay in one place too long because of the government officials he always claimed were looking for him. The family would often move in the middle of the night, leaving behind many of their possessions. Jeannette, her sister and brother saw this as an adventure when they were young, finding something exciting about each place where they lived. There was the desert of California, the small towns along the Arizona border and Battle Mountain, where they lived in an old train depot. Jeannette loved living in Battle Mountain because there was always something to do. Despite the fact the children did not have that many toys, they entertained themselves regularly by tobogganing down the stairs or jumping off the roof with an old blanket as their parachute.

However, the fun never lasted. Jeannette's father would have to quit his job because of some trouble with the local unions. Or perhaps he would just concoct some other wild story for the family. Money would be in short supply and food would become scarce. After a while, bill collectors would start asking for their money and the utilities would be shut off. Jeannette and her siblings, including a new baby sister, would often have to find food on their own, sometimes making a meal out of a stick of butter left over in the refrigerator. Then the family would move on, often into a situation worse than the one they left behind.

When Jeannette's grandmother died, her mother inherited a house and some land in Texas. The family moved into the house, the mother deciding to turn it into a gallery to showcase her art. The family lived in this house for more than a year, and for that year things seemed to settle down for the family. Jeannette entered a school that provided more structure and discipline than she had known for most of her short life. Rex stopped drinking for a short time and Rose Mary received checks for the mineral rights on her land in Texas that paid for winter clothing and food. Life could not have been better. However, again the family fell on hard times and decided to move once more, this time to West Virginia where Rex grew up.

Jeannette did not like her grandmother Walls from the first time she met her. This grandmother was so drastically different from her beloved Grandma Smith that Jeannette could not even imagine being related to this crass woman. Grandmother Walls was an angry woman who often sent the children into the unheated basement without their evening meal. She forced her racial prejudices on Jeannette by encouraging her not to spend time with her one new friend, a black girl from the wrong part of town. Jeannette disliked her grandmother and did not hesitate to stand up for herself and her siblings, especially when her grandmother attempted to touch her brother in an indecent fashion. Jeannette fought for her brother and ended up causing the entire family to get kicked out of the house.

The Walls family bought a rundown shack in the poor section of town. The house was in such poor shape that it did not have indoor plumbing or heat. Jeannette's father refused to get a job while living in this house and the only income the family had, the checks from Texas, barely paid the mortgage. Jeannette and her siblings slept on beds made from ropes and often foraged for food in the trashcans at school. Jeannette began to dream of escaping Welch and experiencing life in some big city, far from her parents. Lori, Jeannette's sister, was the first to escape, moving to New York to go to art school. Jeannette followed a year later and Brian shortly after that. Soon the whole family was in New York, including Rex and Rose Mary, who were so poor that they became homeless after only a few short months in the city. Rex and Rose Mary would become squatters in a rundown building where Rex would die from a heart attack. Jeannette would marry and divorce and marry again, finally finding some peace in her life.